The sky is constantly changing and gifts us with its beauty and speaks to us in the synchronicity of the patterns formed with the Sun, Moon, planets and stars.  “As above, so below.”

This lunar cycle is extremely powerful and significant.  It begins with a partial solar eclipse and super new moon and then moves into a total lunar eclipse at the time of the full moon. This lunar eclipse will be the longest of this century with a duration time of 103 minutes.  This eclipse will be visible primarily in Africa, the Middle East and parts of eastern Europe and Asia including India.  Due to the red glow of the Moon at the time of the eclipse, this is called a Blood Moon. 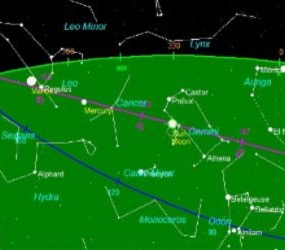 This lunar cycle begins on July 12th (10:47 pm EDT) with our new super Moon located in the stars of Gemini near the star Wasat, meaning “middle” in Arabic.
It is a threshold point — the seed of new possibilities or the power of destruction. The lore regarding the meaning of this star characterizes it as either carrying the energy of violence and destruction or of the ability to speak and seed truth in the midst of the confusion or lack of clarity of others in the public arena.
At the time of the New Moon, the Sun and Moon are opposite Pluto, the planet is about power and profound transformation –either through conscious evolution or destructive involution.
This is a choice point for all of us.  Do we stand centered and empowered in who we are and speak our truth?  Or do we fall prey to the abuse of power and the confusion and chaos in the public arena in this time? 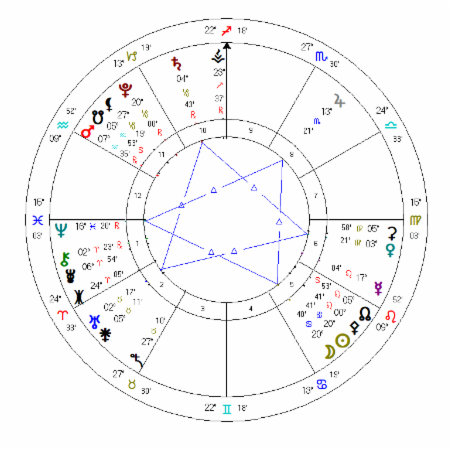 The configuration of the planets in the sky at the time of the New Moon is also extraordinary in that it forms the figure of the Star of David and the hexagon (consisting of two grand trines). This figure of the Star of David is also seen as the Tree of Life in the Kabbalah but was known long before it was used in Judaism.
It is an ancient symbol that has the hexagon at its heart.  The hexagon is the shape of life on our planet.  It is seen in the structure of DNA, in the shape of honeycombs, 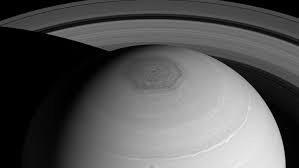 snowflakes and of crystals.  We even see this shape in the pattern of the clouds at the top of Saturn.  In sacred geometry, this is the shape of life, and six is associated with the energy of unconditional love.
In this hexagonal configuration in the sky, the Sun and Moon are part of one grand trine with Jupiter and Neptune.  Neptune is in the stars of Aquarius, in the living waters of wisdom being poured to the Earth by the Water Bearer.  Jupiter is in the stars of Libra, at the top of the fulcrum holding the scales.  This powerful grand (water) trine is calling us to dissolve beliefs that we cling to for a false sense of security and to open to our deeper intuitive knowing and inner guidance and trust in the wisdom of the Cosmos.
The other grand (earth) trine is with Uranus, Saturn and Venus.  Venus is now in the sky next to the star Regulus, the heart of Leo the Lion.  Are we living from the heart with courage? Are we living in alignment with our true values? How are we open to speaking our truth and reshaping our values and standing in our power? How are we open to the clarity and changes that Uranus in Taurus is bringing to guide us into a more equitable global economy and to honor our relationship with the Earth?
Solar and lunar eclipses are wake up calls.
The solar eclipse is a call for us to make changes in who we are and how we act in the world, and the lunar eclipse is a call to see ourselves more clearly emotionally and to honor both the light and shadow aspects of ourselves individually and globally.
During this New Moon time, take time to reflect on ways you may be out of balance in your life or out of alignment with your true self or your deeper values.  Reflect on ways you are living from your head and not your heart or ways in which you make decisions out of a desire for security rather than living your deeper truth or following your own unique path.  We are still in the time of Mars retrograde for this full lunar cycle, so take time to step back and reflect on your actions. 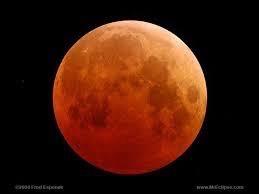 As we move into the time of the Full Moon on July 27th (4:20 pm EDT), we experience the powerful energy of the total lunar eclipse.  The Full Moon is in the sky next to Mars.  Mars is now opposite the Sun and at its brightest in the sky.  This is a dramatic and powerful message being displayed to us in the sky.
The lunar eclipse is calling us to stop, step back and look at the wholeness of who we are — our light and our shadow.  Take time to reflect on the aspects of yourself that you may keep in the dark.  What do you need to see and face in yourself?
Mars in its opposition to the Sun is at the end of its journey away from Source.  It is 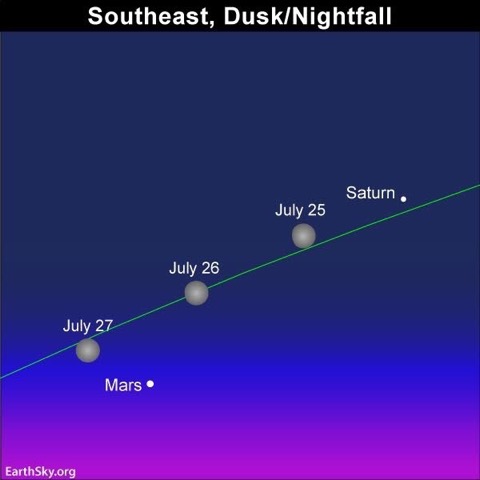 now pausing and is in its retrograde phase until the end of August.  It is a time to look at our actions and decisions.  How are we acting in a way that is in alignment with our true self?  How are we acting in a way that is disconnected from ourselves or is destructive to others?
As we take in this powerful message, gazing at Mars in its brilliance next to the Moon, we can become more conscious of the ways that we may be acting unconsciously or reactively.  We can now step back, reflect and make choices that are more conscious and more in right relationship with ourselves, with others and with the Earth.
On the global level, this powerful lunar eclipse is most visible over Africa, the Middle East, parts of eastern Europe and Asia including India.  This lunar eclipse is calling our attention to these parts of the world which are often targeted for exploitation by other nations.  Collectively, we are being asked to look at our actions and choices as nations.  Are we in right relationship with those in these other parts of the world or are we abusing our power and acting out of self-interest and nationalism as if we could separate ourselves from the others in our global community?
This is a profound wake up call to us globally and may signal powerful shifts or changes in our world economy and value systems.  It is a call to see more clearly what has been in the darkness — to see the abuses of power, dangers of corruption, destruction of the environment, exploitation of others and ways the truth has been concealed to protect the perpetrators of this abuse of power. This may be a time of more disclosure of what has been kept in the darkness and a time in which Earth changes and global econonic instability are calling us collectively into more clarity and justice and right action.
This is a powerful lunar cycle.  It is important to move into this time from a place of trust and not fear.  Know that these energies are guiding us individually and collectively into radical new ways of being.  We are being called to wake up,  to let go of our destructive ways of being, to evolve, to grow in wisdom, and to live from the heart with courage.  If we work this process consciously and honor these energies guiding us through this transformation, we together can co-create a new world.

Mercury – is barely visible in the western sky after sunset
Venus – is an evening star and can be seen in the western sky after sunset
Mars – is still retrograde and will be at its brightest on July 27th when it is exactly opposite the Sun in the sky
Jupiter – is visible high in the sky and setting in the west later in the night
Saturn – is visible for much of the night and is to the east of Jupiter in the sky
Heather2018-07-16T15:13:53+00:00